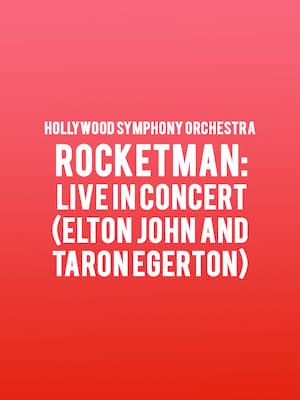 A sequin-encrusted delight. On paper it reads like a by-the-book biopic; on screen it explodes with the kind of colour and energy that only Elton John himself could invoke.

Don your glad rags and get ready to bask in the glow of the one and only Sir Elton John and his on screen protege Taron Egerton when the duo take to the stage during a very special set with the glamorous Hollywood Symphony Orchestra. Having performed together in Cannes to celebrate the release of the critically acclaimed biopic Rocket Man, John and Egerton join forces once more to perform the film's arrangements of classic songs like I'm Still Standing, Your Song and Tiny Dancer.

If that wasn't enough, the Hollywood Symphony ensemble will perform live-to-picture orchestral backing, adding a soaring cinematic feel to proceedings. Having donned his trademark feathers, towering platforms and dazzling on stage outfits, Egerton brought the story of Reginald Dwight's rise to stratospheric stardom under the name Elton John to vivid life during Dexter Fletcher's smash hit musical fantasy. Through close work with the diva himself, he not only nailed John's mannerisms and overall fabulousness, but brought an authenticity to the role with his own soulful vocals.

Sound good to you? Share this page on social media and let your friends know about Hollywood Symphony Orchestra - Rocketman: Live in Concert (Elton John and Taron Egerton) at Greek Theater.