Sorry! You missed King Diamond at Grove of Anaheim 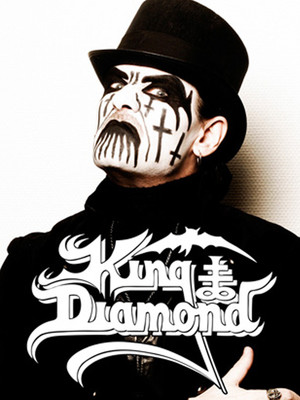 King Diamond's headline set was perhaps the most eagerly-awaited of the whole weekend - did it live up to expectations? Well, yes. OBVIOUSLY.

One of the Kinds of Heavy Metal Cometh

King Diamond aka Kim Bendix Petersen is the undisputed king of Danish metal, frontman of Mercyful Fate and the star of his own self-named band, accomplished guitarist and bassist, he's been a frontrunner in the Scandinavian metal scene since the mid-1970s and now - despite being almost 60 years old - is showing no signs of slowing down.

His dark on-stage demeanor is not act - Mr. Petersen is a follower of LaVeyan Satanism and even sings with a microphone stand made of bones. He used to use a human skull but that was (thankfully) stolen one ill-fated concert. When he's not on stage in all-black getup or recording in the studio, the married frontman can be found at his home in Dallas, Texas, with his singer wife and their cats.

Sound good to you? Share this page on social media and let your friends know about King Diamond at Grove of Anaheim.