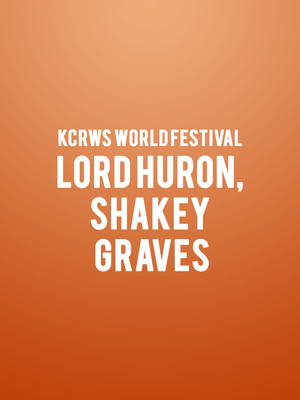 Shakey Graves has made his way into the indie folk rock spotlight with his unashamed stage presence and dominant vocals. This Austin Texan brings one hundred percent of his energy and soul on stage and sheds his soul through the microphone

Thank Folk For That

Riding the wave of indie folk in the early 2010s, Lord Huron emerged with an all together different blend of acoustic folk, noir-tinged pop, surf-esque riffs and hymnal beauty. The quartet hit mainstream success in 2014 with their Western-inspired sophomore album Strange Trails, followed by a feature on Jimmy Kimmel Live and the soundtrack of popular Netflix teen drama 13 Reasons Why. Fusing campfire-side storytelling with earnest lyrics and the heart of a travelling troubadour, Shakey Graves proves his generation's answer to Dylan thanks to his soaring fusion of blues, rock and folk with a one-man-band pioneering spirit.

Sound good to you? Share this page on social media and let your friends know about KCRWs World Festival - Lord Huron, Shakey Graves at Hollywood Bowl.