Sorry! You missed Lauryn Hill and H.E.R. at Hollywood Bowl 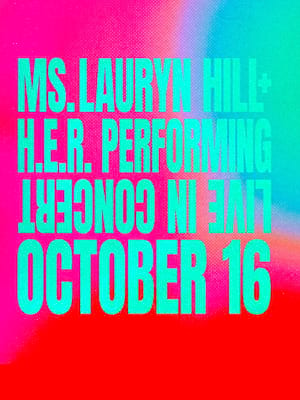 The soul voice of a generation

The Guardian on Lauryn Hill

Why See Lauryn Hill and H.E.R.?

Repping the old school and the new school, Ms. Lauryn Hill and H.E.R join forces for a special co-headline, one-night-only show at the Hollywood Bowl this fall! Iconic R&B songstress Hill first drew attention as the only female member of reggae-tinged hip hop trio Fugees before courting multi-platinum, Grammy-winning success on her own terms with the release of her debut solo album The Miseducation of Lauryn Hill.

The album proved a touchstone for the female artists that followed, including Gabriella Wilson AKA H.E.R. The Californian artist's first brush with the industry came at a young age, when she won Radio Disney's Next Big Thing competition in 2009, releasing her first single in 2014. After a two year hiatus, she emerged with her new persona and a contemporary R&B sound, and was subsequently awarded the 2017 Grammy Awards for Best R&B Performance and for Best R&B Album.

& The Come Up Show Used under Creative Commons License

Sound good to you? Share this page on social media and let your friends know about Lauryn Hill and H.E.R. at Hollywood Bowl.