Sorry! You missed Morrissey with Interpol at Hollywood Bowl 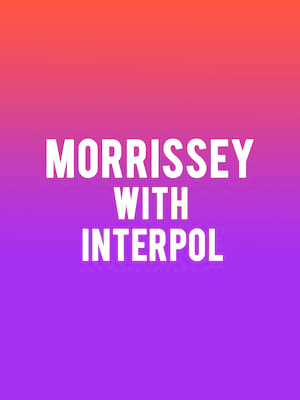 For all his melodramatic choreography, it was Morrissey's singing that was the star of the night. For 20 songs, he crooned and bellowed, and his voice remained strong, like that of someone decades younger.

Why See Morrissey with Interpol?

There's no better way than to end a mammoth, coast crossing North American tour with fireworks during a final, triumphant night at the Hollywood Bowl, and Brit indie icon Morrissey is doing just that. Supporting his latest album California Son, the veteran rocker brings his 2019 Fall Tour to a close with support from post-punk revivalists Interpol at the historic Los Angeles venue for one special night only this October.

Rising to prominence as the crooning front man of groundbreaking alternative pop rock act The Smiths in the 1980s, the acerbic Moz captured hearts and minds with his biting wit, poetic lyrics and outspoken advocacy of society's disaffected. Beyond The Smith's breakup, his solo career blossomed, especially in the states, thanks to the popularity of releases like Viva Hate, You Are The Quarry and Years Of Refusal. No stranger to controversy, he plows ahead on his own terms and remains a seminal figure of the indie music landscape both sides of the Atlantic.

Sound good to you? Share this page on social media and let your friends know about Morrissey with Interpol at Hollywood Bowl.