Sorry! You missed In The Heights at Mysterium Theatre 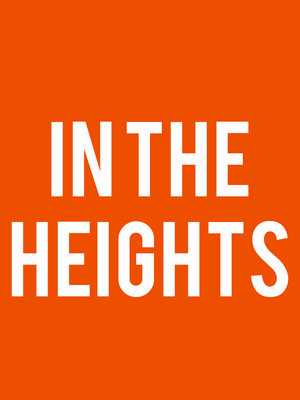 When this musical erupts in one of its expressions of collective joy, the energy it gives off could light up the George Washington Bridge for a year or two. The title song, for instance, is among the most galvanizing opening numbers in recent Broadway me

Why See In The Heights?

In The Heights Is Back, Ten Years After First Dazzling Broadway

Ten years after its Broadway debut, much loved musical In the Heights is back. Over the course of just three days, the play tells the stories of those residing in the Hispanic community of Washington Heights in Manhattan, New York.

Captivated by its vivid storytelling and vibrant music, In the Heights was an immediate success amongst critics and audiences alike. After its opening, the musical received a phenomenal thirteen Tony Award nominations and won four including Best Musical, Best Original Score, and Best Choreography. The show went on to be produced and performed worldwide including the Philippines, the UK, Panama, Japan, Australia, Peru, and Denmark.

In the Heights is a show with something for everyone, leaving audiences enchanted by the exceptional choreography, stunning music, and mesmerizing stories!

Seen In The Heights? Loved it? Hated it?

Sound good to you? Share this page on social media and let your friends know about In The Heights at Mysterium Theatre.