Sorry! You missed Netflix Is A Joke Fest - Marlon Wayans at Regent Theatre 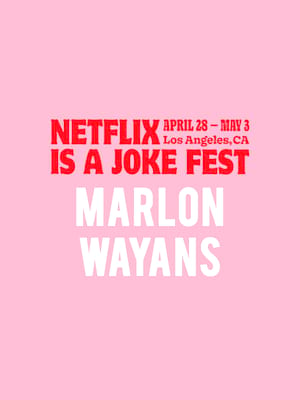 Marlon has a beautiful way of injecting his own personality through his performances. It's never an act, it's genuine, it's crazy, it's Marlon

Back To The Movies

Why See Netflix Is A Joke Fest - Marlon Wayans?

With an increasing number of stand-up specials made especially for its roster (over 200 can be found on-site already), it makes sense that streaming heavyweight Netflix is taking its golden comedy formula to the stage. Taking place from Monday, April 27th to Sunday, May 3rd, the first-ever Netflix Is A Joke Fest will leave LA in stitches at over 100 venues citywide, featuring the biggest and brightest established comics, as well as up and coming performers that are just itching to be discovered by new fans. Don't miss the festival's edition of the Marlon Wayan's Somewhere Under The Rainbow Tour at The Regent Theater, April 28th

Best known for his work on the silver screen, Wayans co-created one of the most successful comedy franchises of recent times - The Scary Movie series. Alongside that, he's worked with some of the most respected directors in the business, appearing in The Coen Brothers' The Ladykillers and Darren Aronofsky's Requiem for a Dream. He returns to his stand up roots on his latest tour, which promises quick wits, Hollywood charm and punchlines aplenty.

Sound good to you? Share this page on social media and let your friends know about Netflix Is A Joke Fest - Marlon Wayans at Regent Theatre.