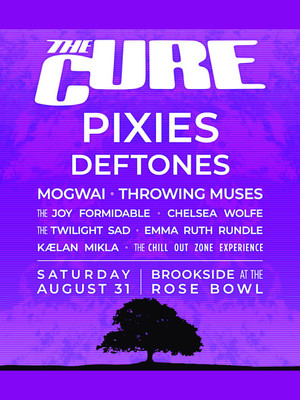 Even with so many people watching them, Smith's bashfulness and earnestness creates an intimacy that's rare for shows of this size.

The Cure curate a brand new festival in Pasadena

English rock band The Cure headline and curate a brand new festival for California, the Pasadena Daydream festival. Inducted into the Rock & Roll Hall of Fame this year, the group bring a selection of their personal favourite artists to the Brookside at the Rose Bowl on August 31st, for an incredible line up featuring the likes of The Pixies, Mogwai, The Deftones, Chelsea Wolfe, The Twilight Sad, Kaelan Mikla, Emma Ruth Rundle, The Joy Formidable and Throwing Muses.

Formed in 1976, The Cure have cemented themselves as one of the most important acts of their generation with three of their thirteen albums going platinum. Off the back of their 40th anniversary show at London's BST Hyde Park festival in 2018, frontman Robert Smith desired to bring a similar celebratory atmosphere to California, with the Brookside at the Rose Bowl set to be the perfect location for the festivities.

Sound good to you? Share this page on social media and let your friends know about Pasadena Daydream Festival at Rose Bowl.