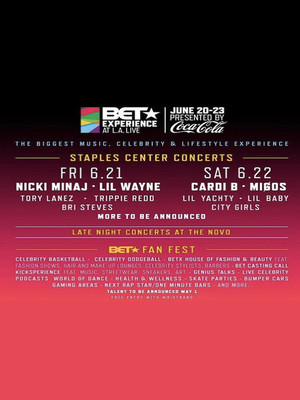 Queen brings a new Nicki Minaj character: the regal, haughty monarch, a woman who insists on sword-sharpened rhymes as a prerogative for excellence.

The ultimate music, celebrity and lifestyle weekend festival is back for its seventh year running and its headliners are bigger than ever. Built around the Black Entertainment Television network's annual awards ceremony, the four day spectacular combines seminars, panels and convention-style activities, with Friday night and Saturday night music concerts topping the chockablock bill!

Rising through the ranks to take her place in the upper echelons of the industry, Trinidadian-American rapping icon Minaj introduced the mainstream to her off-the-wall personas, fast-flow style and neon penchant for bold wigs and costumes with the release of her debut, certified triple platinum studio album Pink Friday. Three albums and millions in records sales later, the Queen of Rap justified her claim to the throne with her fourth platinum album Queen, released in the summer of 2018.