Sorry! You missed Action Bronson at The Observatory

Action Bronson is also touring to: 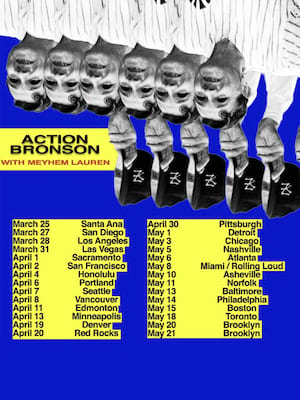 Don't miss this man of many talents live!

Heavyset, blue eyes, ginger beard and head to toe in Polo, Queens native, Action Bronson is possibly our new favorite person. 2020 sees Bronson take the road once more on the Great Bambino tour, with Meyhem Lauren as support. In addition to his most recent EP, Lamb Over Rice, a collaboration with The Alchemist the last few years have seen him release his own cookbook and make his film debut in Martin Scorsese's The Irishman!

Rapping was originally just a hobby due to Bronson being a respected fire-flame gourmet chef in New York City. After hosting his own cooking show, 'Action In The Kitchen', it wasn't until he broke his leg in the kitchen did he concentrate on his music career.

Sound good to you? Share this page on social media and let your friends know about Action Bronson at The Observatory.