Sorry! You missed Netflix is a Joke Fest - The Hall at The Theatre at Ace 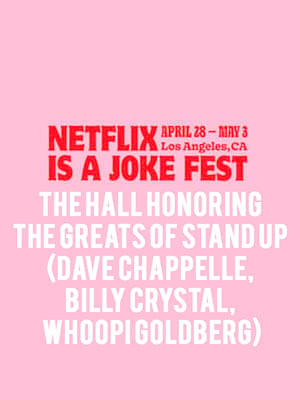 Netflix is a Joke Fest - The Hall

The stars of today salute the legends of yesterday!

Why See Netflix is a Joke Fest - The Hall?

Honoring the Greats of Stand Up

With an increasing number of stand-up specials made especially for its roster (over 200 can be found on-site already), it makes sense that streaming heavyweight Netflix is taking its golden comedy formula to the stage. Taking place from Monday, April 27th to Sunday, May 3rd, the first-ever Netflix Is A Joke Fest will leave LA in stitches at over 100 venues citywide, featuring the biggest and brightest established comics, as well as up and coming performers that are just itching to be discovered by new fans. Don't miss the festival's edition of The Hall, where the greats of today will be honoring the greats of the past at the Theatre at Ace on May 3rd.

Featuring the biggest names in comedy and stand-up, including Dave Chappelle, Billy Crystal, Whoopi Goldberg, Jerry Seinfeld, Kevin Hart, Chris Rock, and Sarah Silverman, this special evening will take us back to the past, celebrating the legacy and work of some of the best-known performers of all time. Expect to hear bits from George Carlin, Richard Prior, Joan Rivers, and Robin Williams as this all-star cast delves into the bedrock of American comedy!

Sound good to you? Share this page on social media and let your friends know about Netflix is a Joke Fest - The Hall at The Theatre at Ace.