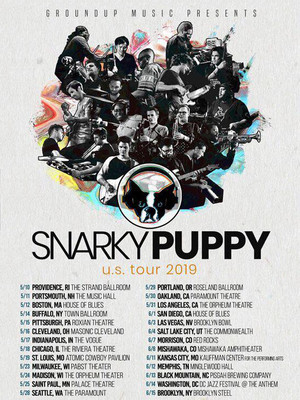 The group have grasped a different improvising opportunity, juggling audaciously with the styles of jazz, world and popular music of the past half-century as if their typical riffs and themes were phrases in a shapely but ever-changing solo.

Three-time Grammy Award Winning jazz and funk collective Snarky Puppy formed in 2004, shaking up the underground contemporary jazz scene with a bold, new flavor of funk fusion that saw them rise swiftly to the upper echelons of the music world. Don't miss them as they head out on a brand new tour that's set to feature the sounds of their newest release from March 2019!

The celebrated instrumental outfit features an ever-revolving roster of highly talented musicians that have performed with the likes of Erykah Badu, Justin Timberlake, and Marcus Miller, but remains centered around bandleader, MD and bass wizard Michael League's otherworldly compositions.

The opening band was at a comfortable volume playing very interesting music... more

Sound good to you? Share this page on social media and let your friends know about Snarky Puppy at Walt Disney Concert Hall.